When Star Athletes and Investors Fade: The Paradox of Skill

Human achievement is an amazing thing.  The rate at which our society is constantly improving is simply staggering.  You can pick just about any industry or any facet of life and see the results.  Look at the world of tech: most of us are carrying phones in our pockets that have more information and more computing power than the computers that facilitated the Moon Landing.  Improvement has been a constant through most of human history.  The combination of technological advancement, increased knowledge, and productivity gains has led to an improvement in the quality of professionals across nearly every industry.

Professional sports represent a great analogy.  Below is a chart illustrating the average driving distance off the tee for professional golfers over time.  Tiger Woods dominated the sport from 1998 to 2008.  When Tiger first showed up on tour the media talked about “Tiger proofing” golf courses because he hit the ball so much farther than his competition. 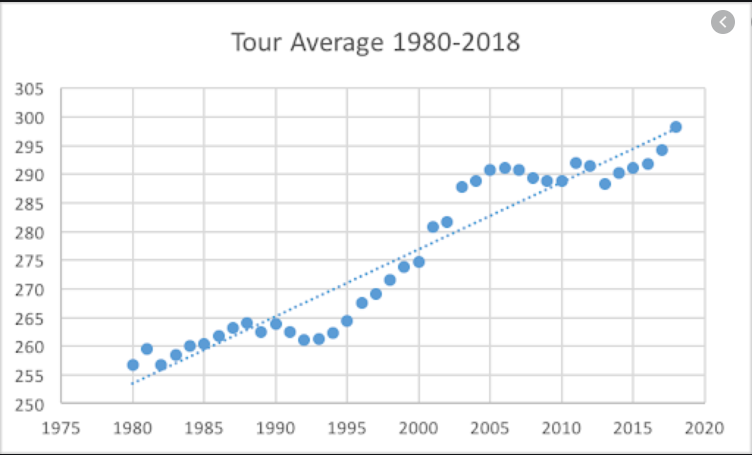 In response to Tiger Woods’s dominance, golfers became significantly better at their trade over the ensuing decade.  Since 2011, every one of golf’s major tournaments has seen its all-time scoring record either broken or tied.  Yet, despite better golfers no one has dominated the sport in recent years.  The #1 world ranking has changed hands 40 times since Tiger lost his grasp in 2008 (note: Tiger did gain #1 status for 60 weeks in 2013-2014).

Today’s golfers are, on average, better than the golfers of yesteryear.  But golf continues to search for the next Tiger only to see that person’s brief dominance reduced to a top 10 in the world ranking.  Nearly every sport has seen the same reduction in dominance from any one athlete.  Even in the NBA where stars reign supreme, we have seen a migration toward stars teaming up to create de facto all-star teams.  As athletes have gotten better, they have become more clustered.  Winning is harder than ever.

The gap between the top players and the bottom players has shrunk.  Michael Mauboussin (professor at Columbia University and well renowned investment thinker) calls this the “Paradox of Skill”: as the game goes on the players become more skillful at playing the game. As players become more skillful, it reduces the differences between the players and removes the ability to generate outsized success by any one player.  The paradox becomes evident when you start to realize that the shrinking gap means that luck and not skill may have a more important impact on the results of the game than it once did.  Put differently, the more skillful the players of a game, the more luck influences outcomes. This is true in golf, basketball, and even investing.

In the investing world, the great debate is whether one should invest in passive vehicles that simply buy the market or should one invest in investment firms with highly skilled players to pick better investments than the market.  What the debate misses is that investment professionals are far better at their trade than they were 30 years ago.  These investment professionals have far more formalized education, they have access to data that others never had, and they often employ data scientists (also known as quants) and risk managers to help them understand their bets.  The industry has gotten better, not worse.  So, how have those managers done against the market?  The results are nothing short of abysmal. Here’s a table: 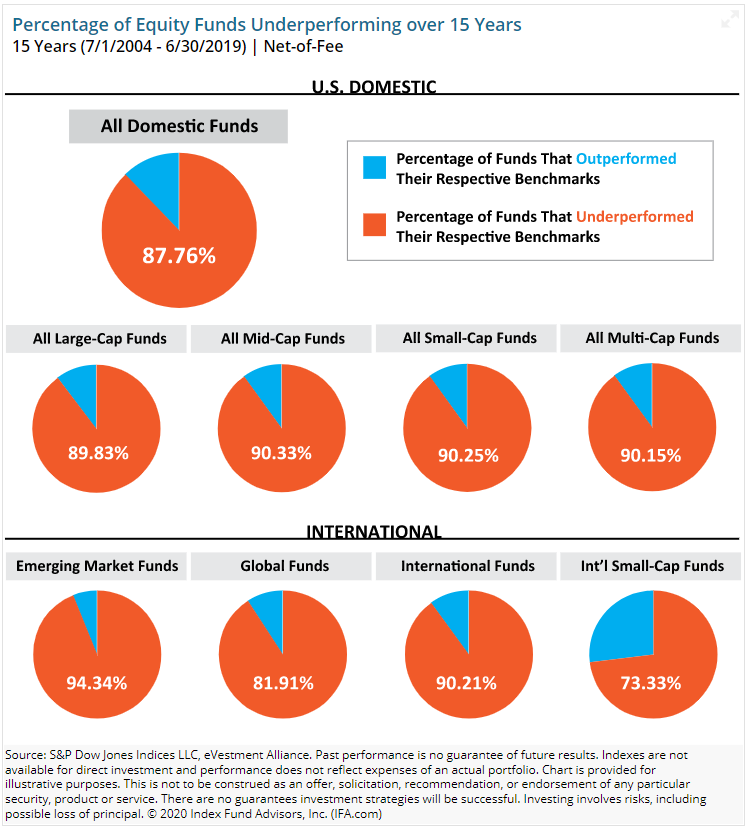 Actively managed equity strategies have had a very hard time.  Fewer than 15% of managers have beaten their benchmarks on a 10-year basis.  Further, these results don’t consider the impact from taxes.  On an after-tax basis, the results would be far more dismal.  We have also observed that correlations have risen in stocks broadly and the gap between the top managers and the bottom managers has narrowed.

Mauboussin also points out that the massive rise in indexing is likely creating distortions in the marketplace, but he concludes that the average investor should probably have some exposure to indexed equity.  These distortions could lead to unintended consequences and could lead to an episode of poor performance.  The risk with an index-only approach is that a tail event (sometimes called a black swan event) could lead to poor enough results that many investors sell their stocks and abandon the strategy at the wrong time.  We have no good way of quantifying the risk of a market distortion.  Given recent events with certain IPOs, we suspect that active management is very much alive and well and that price discovery is still healthy.  The chart below highlights fund flows into active and passive funds: 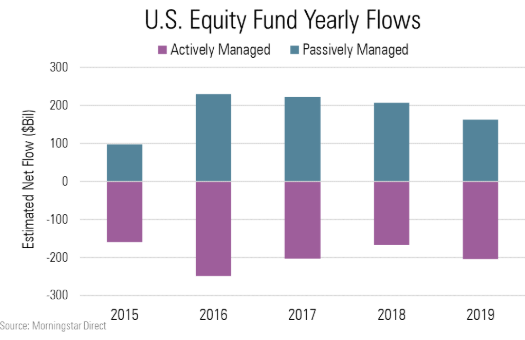 There is a risk that indexing itself grows so fast and by so much it creates additional opportunities for active managers.  While this is possible, we doubt that it’s true in the near-term.  We believe savvy investors should think long and hard about indexing their entire equity portfolio on purely a market cap basis (meaning buy more of the largest and less of the smallest companies).  Pairing their market cap indexes with alternatively weighted strategies (whether it be quantitative or fundamentally active) might mitigate the risk of getting exposed to market distortions.

The U.S. stock market is clearly so saturated with active managers that it is nearing supreme efficiency.  Yet, the dispersion of results across other asset classes is much broader.  The chart below from Mauboussin’s 2017 paper highlights this example (while the chart is dated, current data shows similarly broad dispersion): 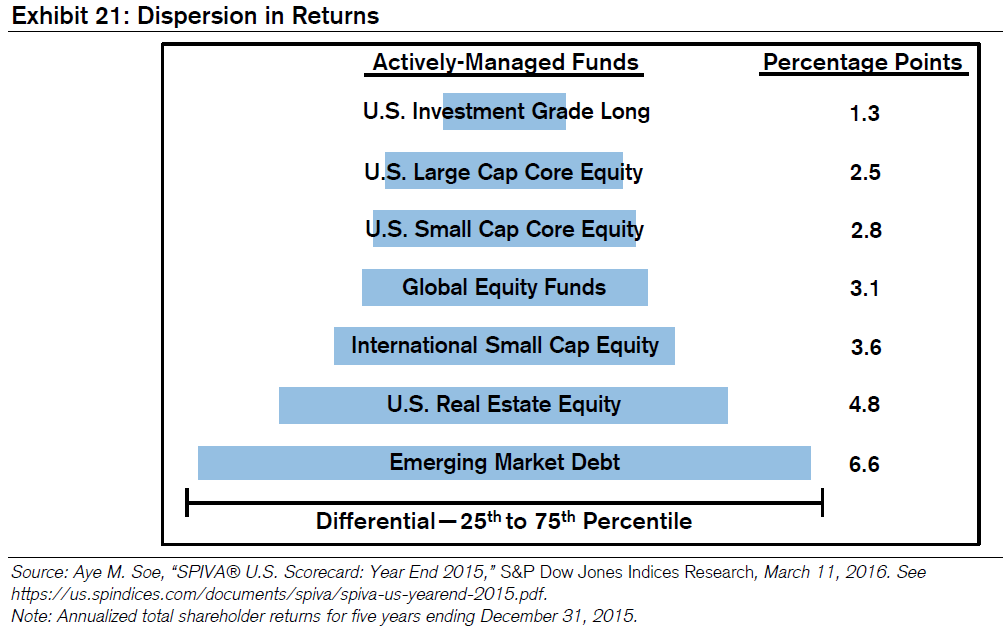 Mauboussin concludes that an investor should pick “easy games” to go active whereas they should simply free ride in an efficient market for the “hard games.”  To us, this means adding much more index and passively managed vehicles in efficient markets such as U.S. large-cap and small-cap stocks.  Indexing may be prudent in other markets such as international developed stocks and emerging markets stocks but may not be a good idea in markets with less efficiency.  Specifically, we would argue that markets such as high yield bonds, emerging markets bonds, micro-cap equities, diversifying strategies, private equity, and private real estate would be poor candidates for any sort of index-replication strategy.  Over time, it’s possible that some of these asset classes reach an inflection point in which the market has become efficient enough to index and free ride.

The paradox of skill presents a strange dynamic.  In a marketplace that is saturated with supremely talented investors, should we simply own the market and not try to play this game?  In some cases, we think the answer is yes.  We think that market exposure through index strategies should be a part of every investor’s portfolio.  We also think investors should consider indexing as implementation, not as asset allocation.  Ultimately, an investor needs to construct a portfolio that has the appropriate return and risk characteristics for their specific needs.  Prudently constructed portfolios will have diversifying return streams across a plethora of capital market segments.  We would argue that some of these asset classes would be better owned in an active vehicle, while others are best owned in a passive structure.  Ultimately, the goal for any investor is to get to their required rate of return with lower risk, lower taxes, and lower fees.  At Verum Partners we strive to do all three.