Vote With Your Heart, Head, and Gut. Invest With Evidence.

We are reaching the end of one of the most contentious elections in modern history.  In a year full of twists and turns, it seems everyone we interact with is on pins and needles.  If you are like us, we will just be happy when it’s over.

There have been more than a few political articles written this year about the intersection of capital markets and politics.  Plenty of market pundits like to make big claims about what will or will not happen when a certain candidate wins, or a certain party takes power.  The stakes are high and thus the pundits are out in full force.  It is important to remember that nearly everyone has an agenda and prognosticators are often pushing a narrative that will benefit them in some way, often financially.

At the time, many predicted in 2016 that a Donald Trump victory would mean a sharp market decline much like we had witnessed during Brexit.  The market closed up the day after the election and continued to rally for more than 14 months before stalling out in January 2018.  As the market started rallying in 2016, many pundits argued that we would see inflation and value stocks would come back strongly.  After a few weeks of strong performance from value stocks we ended up seeing a massive tailwind for the large, growing tech companies that President Trump had often decried.  The market pundits were wrong many times over about President Trump.

Similarly, in 1994, the “bond vigilantes” attacked the Clinton administration for what seemed to be certain fiscal mismanagement by those making the bet.  The theory was that rates were headed higher, inflation would go straight up, and deficits would balloon.  The period between 1995-2000 was one of the best returning periods in market history, the country closed its deficit, and neither rates nor inflation skyrocketed.

The list goes on and on.  Countless poor predictions have been made based on political outcomes over the years.  We hope you do not mistake our political comments above for any sort of endorsement of any policy, party, or candidate.  The point is simply this:  Politics do matter to the market.  Politics will impact the markets in profound ways.  But predicting how they will impact the markets is nearly impossible.  The global economic and political system is far too complex for the human brain to fully comprehend, let alone make predictions about the impacts of political outcomes.  If we work hard enough at it, we could easily come up with the bull and bear case for every possible political outcome from next Tuesday.  In all cases, it would only prove we are pretty darn creative when it comes to making up a story!

Should we simply ignore politics?  When it comes to your asset allocation, you probably should not change your long-term plan based on politics.  Your plan should be nimble, and your plan should be evergreen.  Will we change our risk levels based on the winner from next Tuesday?  No.  Could events unfold that cause us to change our risk levels?  Of course.  But it won’t be directly related to party politics.

To put a finer point on the argument, let’s take a look at how each President has fared for the last 100 years: 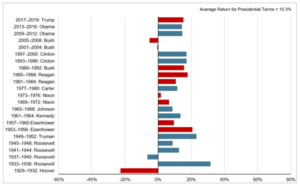 It’s rare to see a negative stock market during a full Presidential term.  It’s only happened during the Great Depression and the Great Recession and neither of those events was directly caused by those in power.  (Spare us the arguments about who is to blame during said financial crises; we’ve heard them all!)  What about congressional control?  Surely a blue or red wave would have an impact, right? 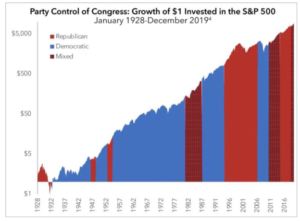 Which party is better for the markets????  They all do fine, but mixed government seems to win by a nose: 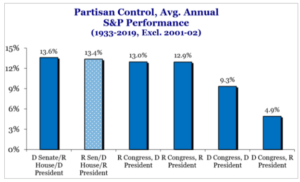 When it comes to mattering most, which government policies seem to have the biggest and most consistent impact on markets?  That is easy.  It has almost nothing to do with Democrats or Republicans.  It has to do with the Federal Reserve.  When central banks ease financial conditions, markets tend to perform quite well.  If 2020 is any indication, this argument still holds: 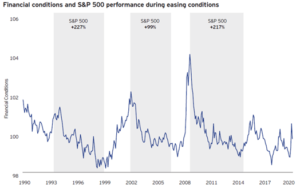 Volatility has been higher recently; is that a concern?  Perhaps, but volatility tends to peak around late October and then recede.  Assuming we get a clear winner of the election, we expect volatility may fall after the election. 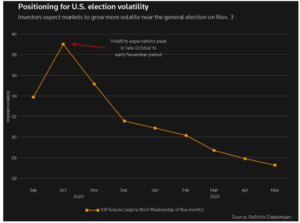 In summary, go vote!  Do your patriotic duty and exercise your right to vote.  Back whoever you think will be best for the country and your family.  But when it comes to your money and your investment strategy, be very careful selling or buying after the election purely based on the results and your excitement or disappointment.  History tells us that markets don’t care whether power is controlled by red or blue.  Markets care about economic growth and profitability.  Those things have happened under most regimes in the United States.  Bottom line: stick to your plan and stay invested!

The information provided is for educational and informational purposes only and does not constitute investment advice and it should not be relied on as such. It should not be considered a solicitation to buy or an offer to sell a security. It does not take into account any investor’s particular investment objectives, strategies, tax status or investment horizon. You should consult your attorney or tax advisor. The views expressed in this commentary are subject to change based on market and other conditions. These documents may contain certain statements that may be deemed forward looking statements. Please note that any such statements are not guarantees of any future performance and actual results or developments may differ materially from those projected. Any projections, market outlooks, or estimates are based upon certain assumptions and should not be construed as indicative of actual events that will occur. For additional information, please visit: https://verumpartnership.com/disclosures/

All information has been obtained from sources believed to be reliable, but its accuracy is not guaranteed. There is no representation or warranty as to the current accuracy, reliability, or completeness of, nor liability for, decisions based on such information, and it should not be relied on as such.