Our Evolving Views of Bitcoin

Our Evolving Views of Bitcoin

Special Disclaimer:  Any allocation to Bitcoin should be considered speculative.  In this paper, we make a case for why investors should not ignore Bitcoin as a potential asset class.  We are not endorsing or recommending that investors own Bitcoin.  Before making any allocation to Bitcoin you should do your own homework, understand what you own, and speak with a financial adviser.  I currently own more than one Bitcoin and less than two Bitcoin personally.  Bitcoin is highly volatile.  In the few weeks that it took to research, write, edit, and post this paper the price of Bitcoin traded in an extremely wide range of $18,000 to $41,000.

In the fall of 2015, at a conference in Charlotte, NC, I received my first lesson on Bitcoin.  I had heard of Bitcoin, but I had no idea what it was.  Listening to the concept of Bitcoin and blockchain I felt like I was in a foreign language class in college.  I had no idea what the speakers were talking about.  When I got home, I researched Bitcoin, found it to be interesting, and then put it aside.  In 2017, the price of Bitcoin went through the roof.  It had all the classic markers of a mania.  I wrote about Bitcoin at the time and concluded while Blockchain was an interesting technology that may change the way the plumbing of the capital markets works, it was not clear to me how it correlated to the price of Bitcoin.  The mania seemed concerning, the evangelists of Bitcoin were nothing short of strange, and everything about the crypto space sent my antenna up.  Our conclusion was clear and straightforward:  Stay away and watch what happens.

As our journey to understand Bitcoin has progressed our opinions have evolved.  I currently own Bitcoin personally but not enough to matter if it goes to zero.  My opinion started to change after I listened to The Investors Podcast with anonymous Twitter handle Plan B in late 2019.  (Plan B has been verified to be a legitimate investment professional who covers Real Estate for a large European institutional investment firm.)  Plan B’s Stock-to-Flow model changed my understanding of digital scarcity.  Supply and Demand drive markets, and the shrinking supply of new Bitcoin coming on the market may drive the price higher unless demand growth shrinks by a proportional amount.  Here are a few summary bullets of our paper:

What Is the Use Case for Bitcoin or other Cryptocurrencies?

This paper will primarily focus on the first bullet, the store of value.  By our estimation, Bitcoin is the likely winner to be considered “digital gold.”  Its knowable final number of Bitcoin lead Bitcoin to be scarce.  Other cryptocurrencies and businesses are working to figure out how to make crypto transactional and how to use blockchain and cryptocurrencies to build things.  At the time of this writing, the most likely candidate to win the “Build Digital Applications” category is Ethereum.  Ethereum (often referred to as “Ether”) is clearly not a finished product today and time will tell as to whether it successfully delivers the disruption that many speculate it will.  Regarding the transactional category, other cryptocurrencies such as Bitcoin Cash and XRP are attempting to offer an easier transactional experience.  (Note:  XRP is receiving attention by the SEC as its sponsor company Ripple allegedly committed securities fraud when marketing the coin.)  In this paper, we focus on Bitcoin and digital scarcity.

How Do You Value Bitcoin?

Many have tried to value Bitcoin.  The range of possible values is infinite.  One problem with valuing Bitcoin is that it can’t be valued through traditional intrinsic valuation methods the way stocks and bonds are valued.  Bitcoin fits into the “Monetary Value” camp, similar to precious metals, fiat currencies, and fine artwork.  It is possible that Bitcoin will ultimately be rendered worthless.  Perhaps governments can destroy it because it is a threat.  Perhaps other coins can be created, and the market will be flooded and it turns out Bitcoin isn’t actually scarce like gold or silver.  Perhaps Bitcoin should be valued based on network effects based on the pool of people transacting in Bitcoin.

Bitcoin can most easily be compared to gold and to the U.S. dollar: 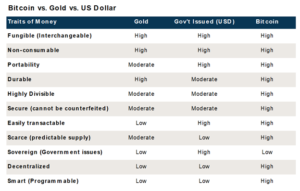 Given the various methods of valuation that we have witnessed and observed, we give the most credence to the Stock-to-Flow model.  This model, if it ultimately holds, is unquestionably the best rationale that we have found for owning Bitcoin in your portfolio.

Anonymous Twitter account Plan B (who has been verified by multiple sources as a professional real estate investor for a European pension fund) has created a Stock-to-Flow model that has explained historical pricing of Bitcoin (R-squared = 0.99).  If this model were to hold, the price of Bitcoin would roughly be between US$55,000 and $200,000 by 12/31/2021 and would be between $800,000 and $2,000,000 by 12/31/2024.  These are obviously eye-popping numbers.  Many factors could come into play to ensure that Bitcoin does not reach these heights.  The likelihood of these prices being obtained is unknowable.  One thing is sure:  when valued using a Stock-to-Flow model, the price of Bitcoin should increase dramatically following each halving.  Ultimately, the question is when will the model break down?  Thus far, the model has been surprisingly accurate.  The model ultimately predicts that Bitcoin’s total market capitalization will exceed $1 Trillion over a reasonable time following last May’s halving.  The value today sits at around $450 Billion.  You can read Plan B’s updated paper here:  https://medium.com/@100trillionUSD/bitcoin-stock-to-flow-cross-asset-model-50d260feed12

The original paper that Plan B wrote is here:  https://medium.com/@100trillionUSD/modeling-bitcoins-value-with-scarcity-91fa0fc03e25

For an alternative set of valuation methodologies please view this piece from the CFA Institute: https://www.cfainstitute.org/-/media/documents/article/rf-brief/rfbr-cryptoassets.ashx

Why Would There Be Value in Digital Scarcity vs. Gold or Silver or Real Estate or Stocks or Currency?

Valuing something that pays no income is very difficult.  Some argue that Bitcoin is worthless because it doesn’t pay an income and it isn’t inherently being used for transactions or being used to build something (gold vs. steel, for instance).

However, Bitcoin’s payment system allows anyone to send money electronically and instantaneously anywhere around the world for free (or for the cost of electricity and hardware, effectively).  For Americans like me, this may not seem a big deal just yet.  But ask someone from Argentina who has now seen their currency devalue multiple times in their lifetimes how nice it would be to hold an asset other than Argentine pesos and send that asset back and forth to family members in another country for free.  These transactions can happen anonymously which means people can get money out from under the thumb of an authoritarian dictator.  With respect to Bitcoin usage, numerous emerging markets have seen huge upticks in Bitcoin transactions as citizens question whether assets denominated in their local currency might present a risk to their financial futures.  We think it is likely a currency that can easily be sent electronically for nearly zero cost will serve a very specific need in the marketplace.  Further, the scarcity of Bitcoin is more knowable than the scarcity of gold or silver which is still being mined.  In recent years approximately 2% of gold’s current supply has been added to its stock through mining.  Bitcoin’s stock-to-flow is set to exceed gold within a few years.

Where Will the Money Come From to Take Bitcoin to Such High Levels?

The short answer is that Bitcoin is already at a market value of $450B without sitting in the mainstream of the capital markets system.  Institutional investors such as endowments, pension funds, sovereign wealth funds and other allocators such as wealth managers and RIAs (like Verum Partners) have a very hard time allocating to Bitcoin.  Many are not allowed to buy it and most everyone can’t access it at the traditional custodial platforms.  There are not many good answers.  Hedge funds are starting to dip their toes into the water, but it wasn’t until this year that famous hedge funds managers such as Paul Tudor Jones and Stan Druckenmiller each blessed the idea of owning Bitcoin.

A thought experiment:  What if we could time travel to 2012, and in 2012 you were told the 2020 market cap of Apple, Amazon, Facebook, Google, Microsoft, and Netflix and you asked, “where would the money come from to get to those market cap levels?”  Today we know the answer.  To use famous venture capitalist Marc Andreessen’s quote – “Software is eating the world.”  Michael Saylor, the CEO of MicroStrategy who recently put his company’s cash into Bitcoin, made the point that the primary trend of the last few decades has been the dematerialization of things and information.  (Yes, Michael is both conflicted and biased as are most people telling you about Bitcoin.)  For instance:

Similarly, there is a logical argument to be made that Bitcoin could dematerialize money.  By this, we mean that Bitcoin and the blockchain technology may disintermediate the financial services firms that act as toll operators and middlemen.  Certain banking such as custodial banking or money transactions may be disintermediated due to the blockchain.  We could even see a day in which the ETF, mutual fund, and collective fund businesses are disrupted due to blockchain (meaning custody may allow investors to own slivers of the collective underlying investments instead of pooling money into shares of a fund).  Institutional demand is growing, as the chart below illustrates, covering the month of November 2020 alone: 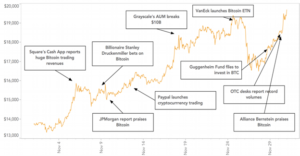 What Are the Major Constraints for Bitcoin?

Does Bitcoin Fit Within an Optimized Portfolio?

We set out to model Bitcoin within the constructs of a portfolio.  When we conducted this analysis the price of Bitcoin was $18,000 (the price rapidly escalated to $41,000 in just a few weeks then fell back somewhat).  Rather than using historical returns and risk (since 2013 the annual return has been ~200% and risk has been ~95%), we created a probability weighted expected return framework.  We made the following assumptions (in an attempt to be conservative): 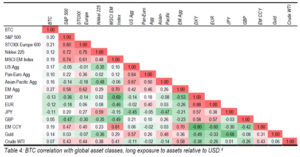 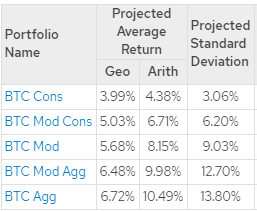 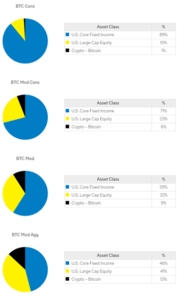 Given the sudden rise in Bitcoin recently we would argue that expected returns have come down to a certain degree.  As prices rise, we think the chance of Bitcoin ultimately going to zero reduces significantly, but the asymmetric upside opportunities diminish.  Nevertheless, the math is still compelling and likely warrants a small – potentially very small – allocation.

How Can I Buy Bitcoin?

Resources to learn more about Bitcoin: