In Howard Marks’ most recent memo titled “Time For Thinking,” he wrote, “a moderate recovery – marked by reasonable growth, realistic expectations, an absence of corporate overexpansion and a lack of investor euphoria – was struck down by an unexpected meteor strike.”  This quote made me rethink the framing of the impact of COVID-19 on markets.  To illustrate the meteor strike, look no further than this chart: 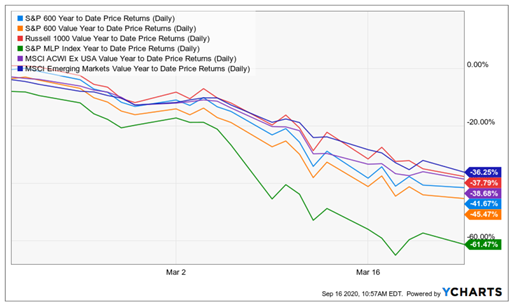 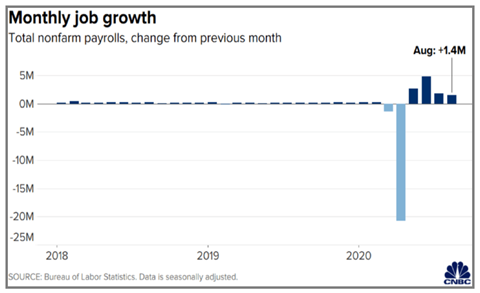 If COVID-19 had happened at any time and at any phase of an economic cycle, it would have caused a deep recession and a deep bear market.  The bear market and recession would likely look like the charts above, even if it were happening in a very different economy.

Many past events that have triggered recessions may have been unimportant events in other economic cycles.  Those events were perfectly suited to end that specific economic expansion.  Typically, recession creating events are not actually recession creators at all.  They are catalysts that trigger a recession at a very specific time in which economic growth has gotten out of hand, corporate overexpansion has persisted for far too long, and investor euphoria is supremely high.

So, what makes the COVID-19 pandemic different?  Perhaps we need to ignore this recession from a cycle perspective and instead think about the recession as an interrupter to the economic cycle that had persisted since 2009.  When thought of this way, things make sense.  After the March economic shutdowns, we have now seen massive new leverage in the corporate sector and government sector.  We have started to see a thawing of the M&A market much more quickly than we ever would have thought; and with a lot of dry powder we should expect to continue to see more and more deals.  Not only are IPOs taking place post COVID but their price action looks like 1999 all of a sudden.  (If you don’t believe me, Google the Snowflake IPO or the rash of new SPAC IPOs that provide “blank checks” to sponsors.)

Lastly, investor euphoria is higher right now than it has been since the late 1990s tech bubble.  Account openings at the big retail brokerages have exploded as many found trading stocks to be an interesting hobby while they were quarantined and sports betting was halted.

Further, data from the American Association of the Individual Investor (AAII) measuring overall percentage allocation to stocks in individual portfolios illustrates that the average investor is not bearish.  In fact, the typical investor holds a much higher allocation to stocks (62% according to Y Charts) than they did at the market bottom in 2002 and 2009 (less than 45% for each time period).  See the latest chart:

In the last few months, we have witnessed some of the silliest market happenings in recent history.  For instance, check out the chart on Hertz Rent a Car after it filed for bankruptcy.  The stock went up 6X after the filing!  This form of speculation and extreme value destruction gives us the final missing piece of a cycle.  Ultimately, we don’t know where this ends; but we know that cycles do happen and it’s very important investors understand that just because we have an economic recession with very high unemployment and just because we saw a brief 33% drop in the stock market doesn’t mean we have a buying opportunity that is similar to 2009.  In fact, this may be one of the worst buying opportunities of our time.  Our guess is that COVID-19 started a recession a year or so before a normal recession would have taken place.  While we are in a recession today, market forces have combined for one last hurrah in the final stages of the economic and market cycles that were born out of 2009.  We are not in the early innings of a bull market but instead are in the very late stages of a long and steady bull market.  We will know a new bull market has arrived when we see a meaningful correction, attractive equity market valuations, large scale corporate bond defaults with sustained credit spreads at higher levels, and a leadership change in the stocks establishing the way upward.

The information provided is for educational and informational purposes only and does not constitute investment advice and it should not be relied on as such. It should not be considered a solicitation to buy or an offer to sell a security. It does not take into account any investor’s particular investment objectives, strategies, tax status or investment horizon. You should consult your attorney or tax advisor. The views expressed in this commentary are subject to change based on market and other conditions. These documents may contain certain statements that may be deemed forward looking statements. Please note that any such statements are not guarantees of any future performance and actual results or developments may differ materially from those projected. Any projections, market outlooks, or estimates are based upon certain assumptions and should not be construed as indicative of actual events that will occur. For additional information, please visit: https://verumpartnership.com/disclosures/

All information has been obtained from sources believed to be reliable, but its accuracy is not guaranteed. There is no representation or warranty as to the current accuracy, reliability, or completeness of, nor liability for, decisions based on such information, and it should not be relied on as such.